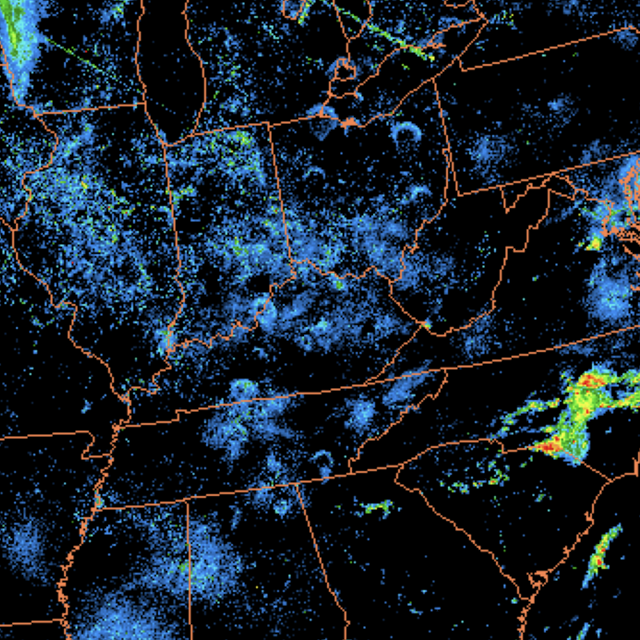 It's been raining pretty heavily all morning so I didn't head out to my banding site. I was checking weather radar to see what this afternoon might look like when I noticed a really interesting image on the screen. All over the eastern U.S. I noticed the formation of what I believe are "roost rings" growing in size and then disappearing. These are radar images showing large flocks of birds rising up from their night roost to go off and feed.

If you look at Ohio on this image you will see 4 of these "rings". As far as what species this might be I'm not sure but my best guess is they could be Purple Martins and other swallows which are known to roost in flocks of up to 40,000 or more birds in some locations called pre-migratory roosts on their way south. It might also be groups of blackbirds which can form really large flocks. In some cases (not this one) it might also be insects or bats. Biologic returns on radar are fascinating and can tell us things we might not otherwise be aware of such as locations of these large roosts and the timing of movement by these large flocks.

There are still folks who argue that these images are either false returns or moisture in the air but not birds. I can assure you that radar ornithology has been understood for the last 50 years and is an extremely useful tool when it comes to tracking spring and fall migrations. So if you want to understand how useful this technology is you should check out the ebird related site called Birdcast, a great tool for birders.

Posted by Minnesota Birdnerd at 10:07 AM