Well it has been a while since I've sat down and updated the blog but lots was going on this summer besides the pandemic chaos. I spent over 100 days in the field banding and am still working on wrapping up the records for this season. I'll post more on that later.

What I'd like to talk about today is a rare bird that showed up in Minnesota 3 days ago. A Ross' Gull, which is a far northern species usually seen in Alaska and Siberia, somehow found its way to a sandbar at the confluence of the Mississippi River and the St. Croix River at Prescott, Wisconsin. Prescott is just across the river from Washington County, Minnesota at Point Douglas Park. 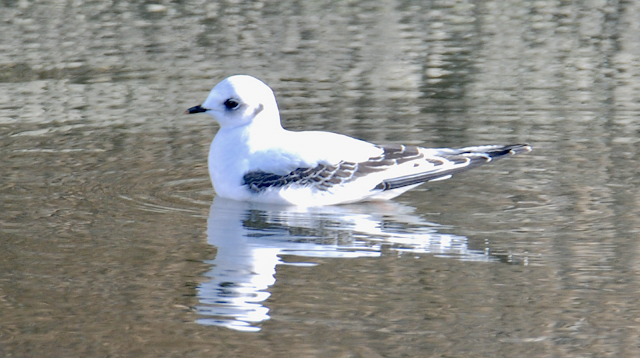 Juvenile Ross' Gull at Point Douglas Park, Minnesota
I'm not one to make a habit of chasing rare birds but this is a bird that I would never have expected to see in Minnesota, if ever. When it shows up so close to home though I had to make the attempt. This is a really cooperative bird and seem unfazed by all the people looking for it. It spends most of the time on the water under the railroad bridge that crosses the river or on the sandbar that is formed on the Minnesota side of the river. The only thing that seems to agitate the bird is the trains that rumble across the bridge occasionally.
Yesterday the birding gods were smiling because not only did I get great looks at the bird, the weather was unusually warm and sunny. It was the perfect day to look for birds, not just mega-rare birds. As we birders are getting ready to wrap up the year lists from 2021 and start a new one on 1-1-22 it's nice to add a tick or two on the checklist so late in the year.
The bird has stayed for 4 days now so if you haven't had a chance to get down to see it you still have time.
Posted by Minnesota Birdnerd at 9:36 AM