Sometimes when I'm banding I'll catch a species of bird I've never handled before and that can be both exciting and frustrating. Then there are the birds I catch that I have handled before but one individual is different enough to give me pause. I had that experience recently when I walked up to one of my nets and pulled out a bird that made me say "What the...." 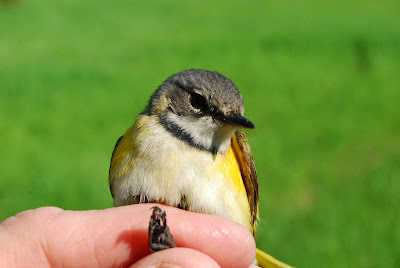 The neck band was something I had never seen. However, once I looked at the whole bird, it was actually more obvious than you might think. If you look at the whole bird it can only be one species. 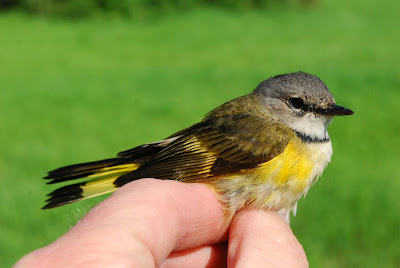 What a cool bird. This is an individual I would love to catch again and see how the next molt makes him look. Should be a normal male Redstart plumage.

Remember, just because something doesn't look exactly like the field guide picture doesn't mean it's a hybrid or a previously undiscovered species.
Posted by Minnesota Birdnerd at 10:25 PM