I've had the great fortune to be able to get out into the field quite a bit in the last week. Radar returns at night have shown very heavy migration movement lately and the birds in the nets back that up.

New species for the fall are showing up in numbers. Ovenbird, Swainson's Thrush, Red-eyed Vireo and all the flycatchers have been increasing in abundance this week. 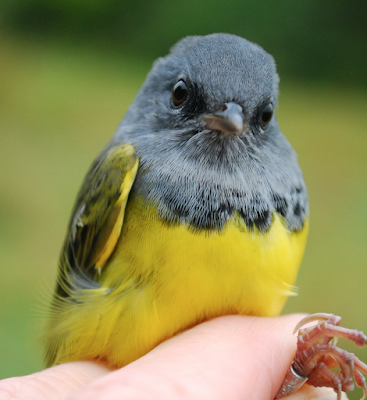 Mourning warblers have been fun to work on daily. This male looks like he has a bit of attitude but he was calm during processing. 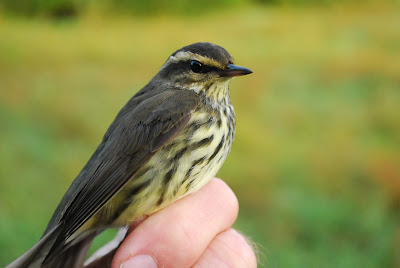 Northern Waterthrush is a pretty common migrant in spring and fall. Caught this one in a forest/grassland edge, not near water which is more the case usually. 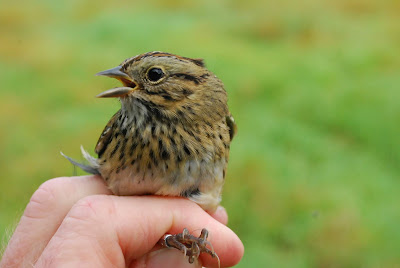 Sparrows move through this part of Minnesota mostly in the month of October but we do see some early movers like this Lincoln's Sparrow. 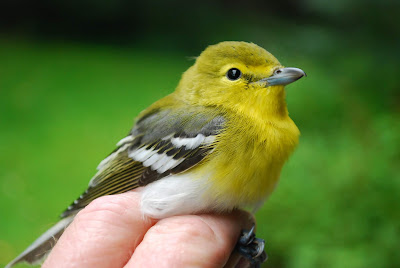 The highlight of Sunday's banding was not one but two Yellow-throated Vireos. In spite of the cool temps and off and on rain we had some nice birds but none was as exciting as this bird.

The weather for the next 2-3 days looks to be poor for field work. Rain and wind are predicted until Saturday. Another glitch in the system is that the National Weather Service Doppler Radar in Chanhassen, MN has be shut down for maintenance (they're replacing the radars base). Not sure we'll be able to check night migration for a week or so. Might have to go outside and just listen.
Posted by Minnesota Birdnerd at 7:41 PM