With all the birds we handle while we're banding, once in a while we have one that gives us insight into the daily life of a bird. The first two photos below are close ups of the wing and tail of a Black-capped Chickadee we caught Sunday while banding. The light and dark bars on these feathers are referred to as growth bars. This phenomenon has been known and written about for over a hundred years but it is not something most people see unless they have a bird in the hand. We now know that this pattern is caused by conditions that vary from day to night as the feather develops. In this case probably the alternation between day when the bird is being fed and night when it is not. There is also a situation where there is a significant interference with access to nutrition that is reflected as fault bars, an actual weakening of the feather usually in the flight and tail feathers. 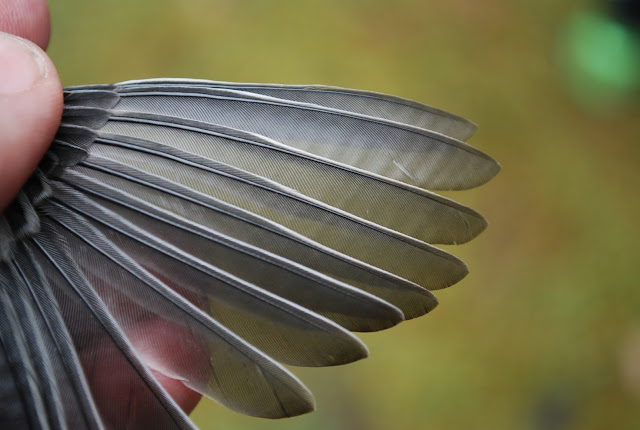 In other words, things like poor weather, a parent bird being prevented from feeding young birds regularly, or general lack of prey items can result in fault bars and sometimes even a weakening in the feather structure itself. The symmetrical pattern of the growth bars across all the feathers is different. This bird shows a pattern where one light bar and one dark bar represent 24 hours of growth. There are cases where an adult bird might lose and replace a single feather and that single feather shows growth bars but when all the tail feathers or wing feathers show this it can be an indication but is not definitive of a juvenile bird since those feathers were all being grown at the same time. 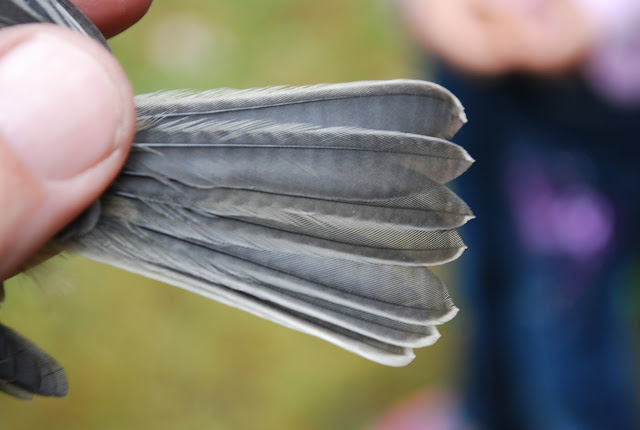 Even normal, seasonal molt requires lots of energy and different groups of birds show different patterns of molt. Because molt is tied to energy several strategies have developed. Some migrant birds molt after they have fledged their young but before they leave the breeding grounds. Others begin their molt on the breeding grounds but suspend their molt during migration and finish the process on the wintering grounds. Some birds just wait until the reach the wintering grounds. Local birds that do not migrate have slightly less concern about energy and show a more protracted molt. 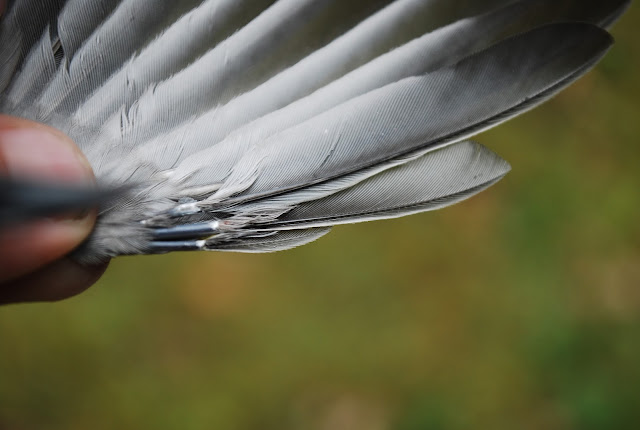 No matter what, molting in a whole new set of feathers is a big investment. The picture above is of an adult Gray Catbird wing from Sunday that is growing new primaries as it is moving south. This individual will need to find enough energy to both grow these new feathers and to continue on its migration.
The good news is that all those "confusing fall warblers" that are moving through right now will reappear next May with a brand new set of feathers that will make most of them easier to identify. And don't even get me started on the juvenile sparrows that are just now showing up!
Posted by Minnesota Birdnerd at 5:10 PM

This is fascinating, Roger, I learn so much from your excellent blog.
Val Cunningham